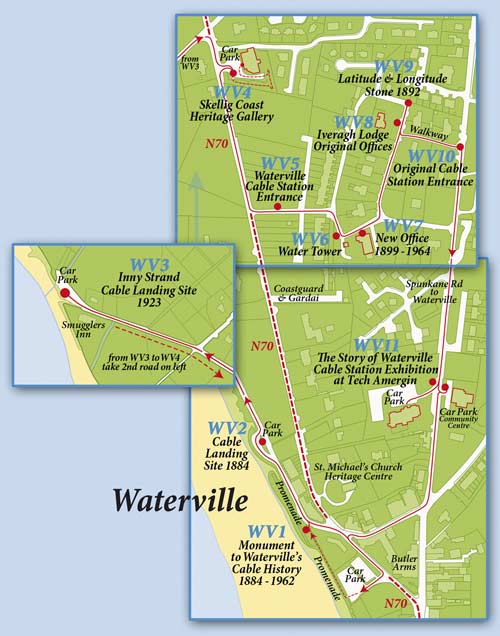 Google map of the Waterville area 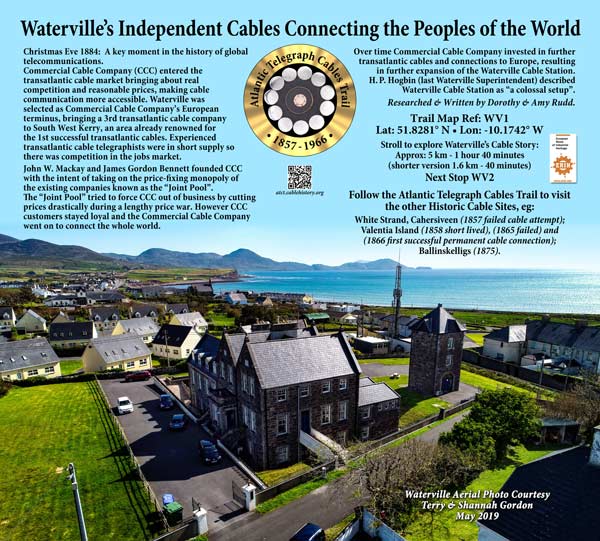 Standing on Waterville’s promenade this monument commemorates the Commercial Cable Company’s Waterville Station, which played a pivotal role in the growth of global telecommunications, bringing about real competition and reasonable prices by taking on the price-fixing monopoly.
This is an ideal starting point for a walking tour of Waterville’s cable sites, approximately 5km/1 hour 40 minutes at a leisurely pace (short version 1.6km/40 minutes).
Parking also at WV2, 3, 4 and 11. 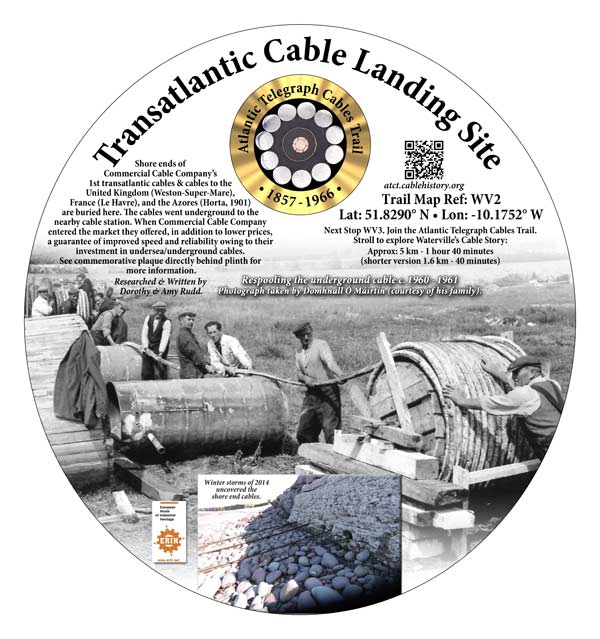 Location of the (still buried) shore ends of Commercial Cable Company’s first transatlantic cables and subsequent cables to the United Kingdom and Continent, where fine views of Ballinskelligs Bay are to be seen. Occasionally cables may be exposed and seen on the beach. 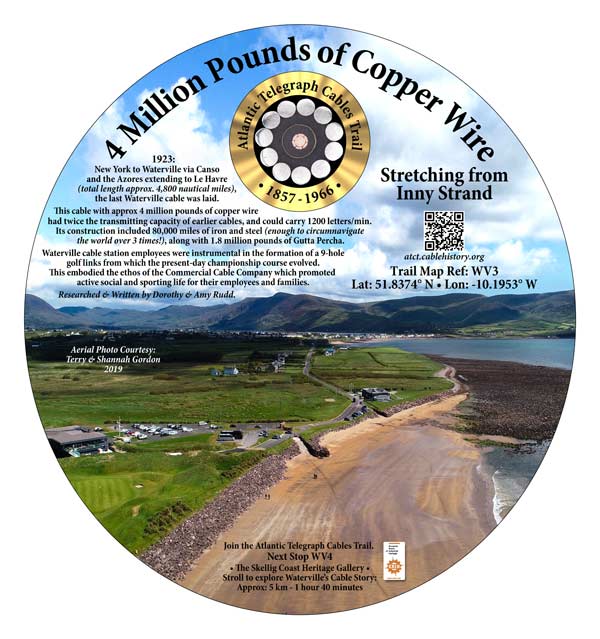 Waterville’s renowned sandy beach was the landing site for some of the Commercial Cable Company’s later cables, including the “Giant Cable” of 1923.  Waterville cable station employees were instrumental in the formation of a 9-hole golf links from which Waterville Golf Links championship course evolved. 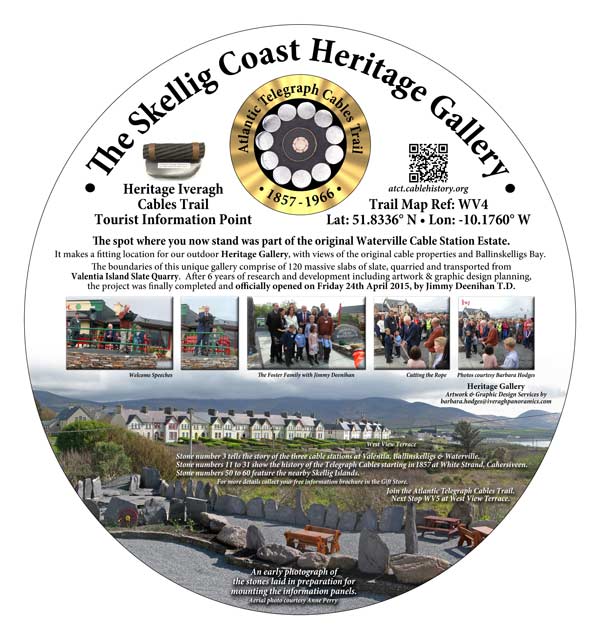 The 146 illustrated information panels in this outdoor gallery include panels on the story of Iveragh’s Atlantic Telegraph Cables. The panels are mounted on 120 massive slabs of slate, which were quarried and transported from Valentia Island slate quarry. 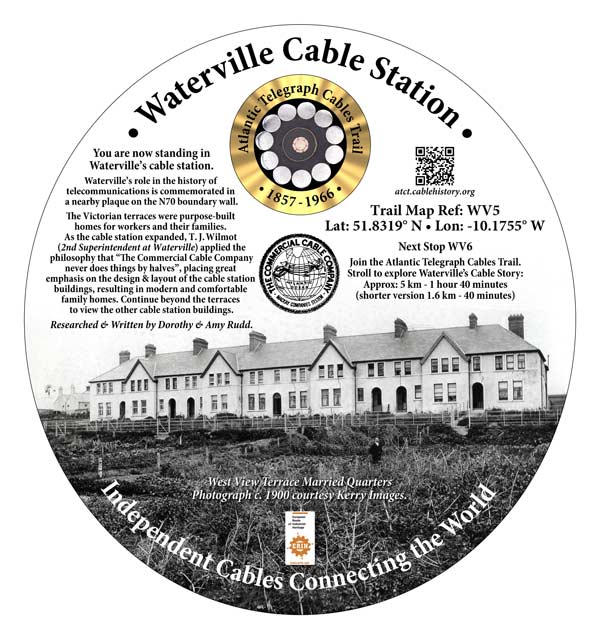 As the European terminus for the Commercial Cable Company transatlantic cables, Waterville cable station grew to be one of the largest cable stations in the world, sending and receiving vast numbers of messages globally. From here you can stroll around the Victorian-era planned development, which combined offices and support buildings with on-site bachelor accommodations, family homes, shop and sports amenities. 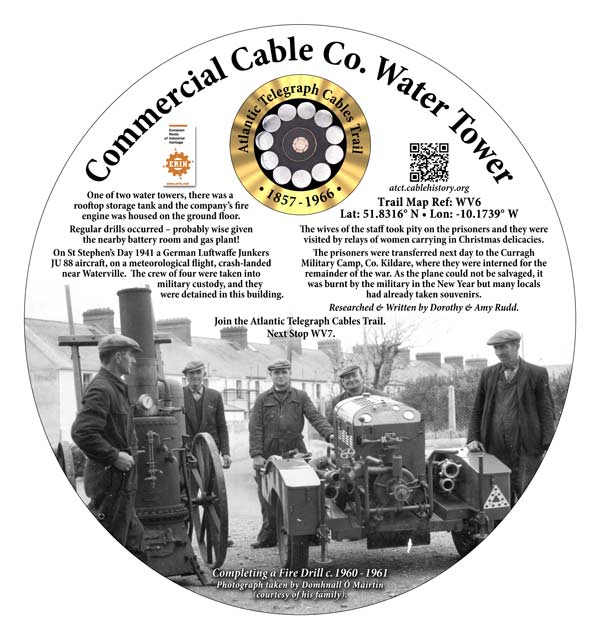 One of two water towers, this had a rooftop storage tank, and the company’s fire engine was housed on the ground floor.  The second tower, a wooden structure located near WV8, was demolished in the 1950s. This plinth relates the fascinating story of the German World War II detainees. 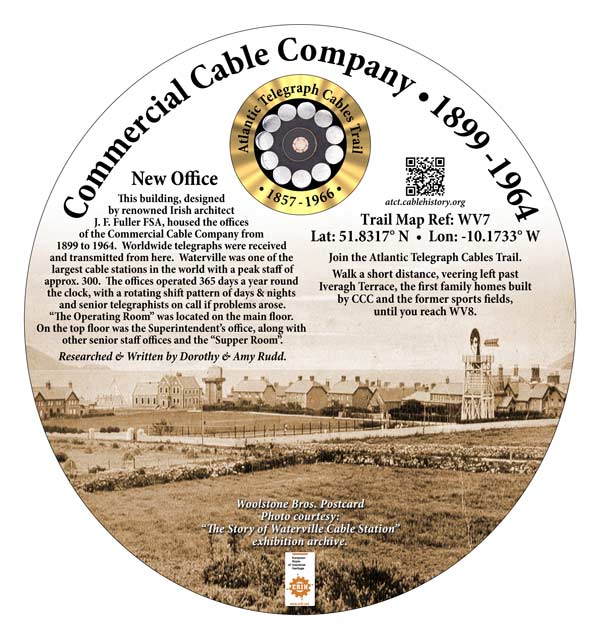 This limestone building, designed by renowned Irish architect J. F. Fuller F.S.A., housed the offices of the Commercial Cable Company from 1899, when they were transferred from Iveragh Lodge (WV8). Walk a short distance, veering past Iveragh Terrace, the first family homes of the cable station, noting the cable decoration around windows and doors and the former sports fields, on the way to WV8. 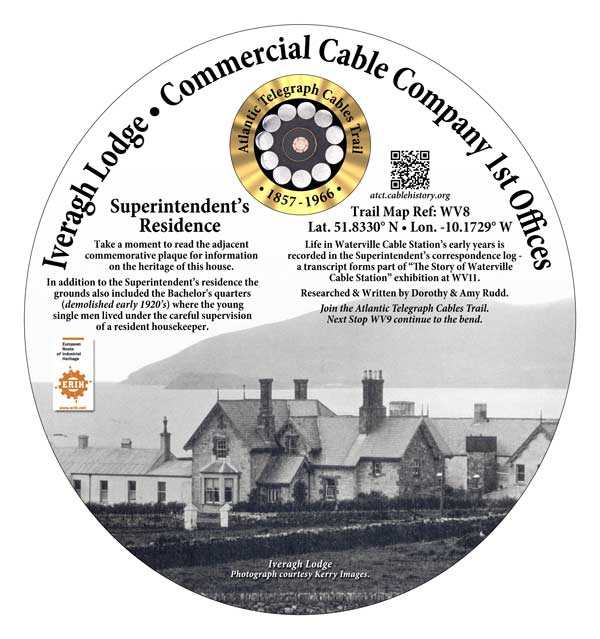 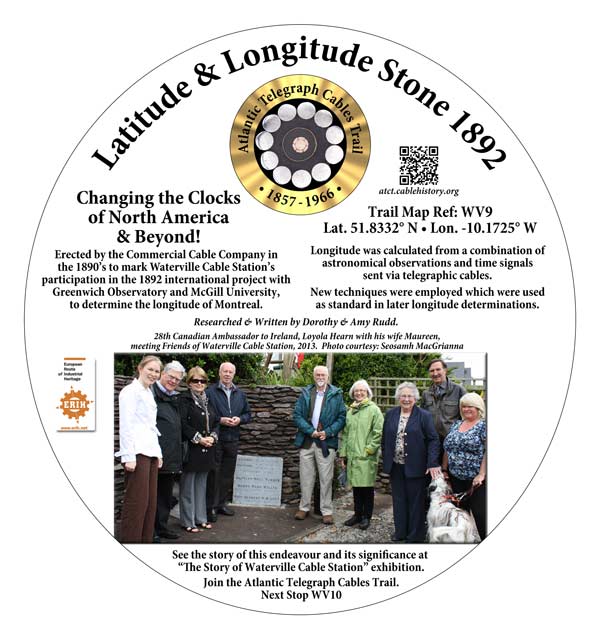 Lost for over three decades, this stone was originally erected in the 1890s and commemorates Waterville station’s collaboration with Greenwich Observatory and McGill University to determine the longitude of Montreal (1892).  For the story of this endeavour and its significance see “The Story of Waterville Cable Station” exhibition (WV11). 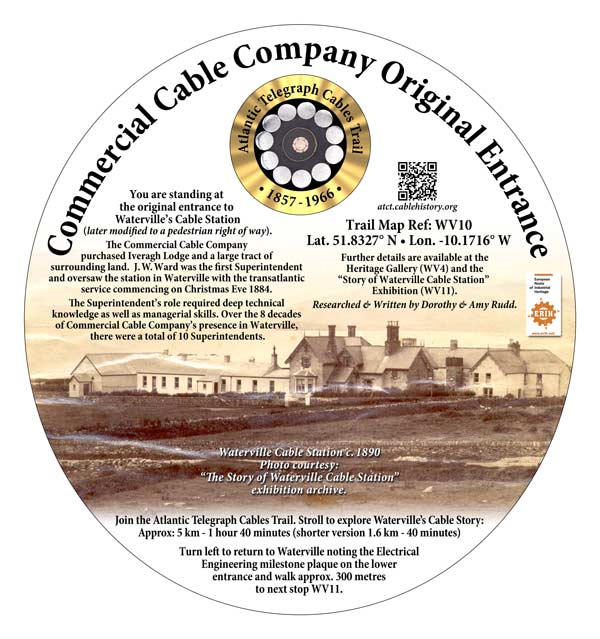 This was the original entrance to Waterville’s cable station.  As the cable station expanded additional entrances were constructed, and this was modified to a pedestrian right of way.  The Institute of Electrical and Electronics Engineers “Electrical Engineering Milestone” plaque (2000) is located at the lower entrance on the way to WV11. 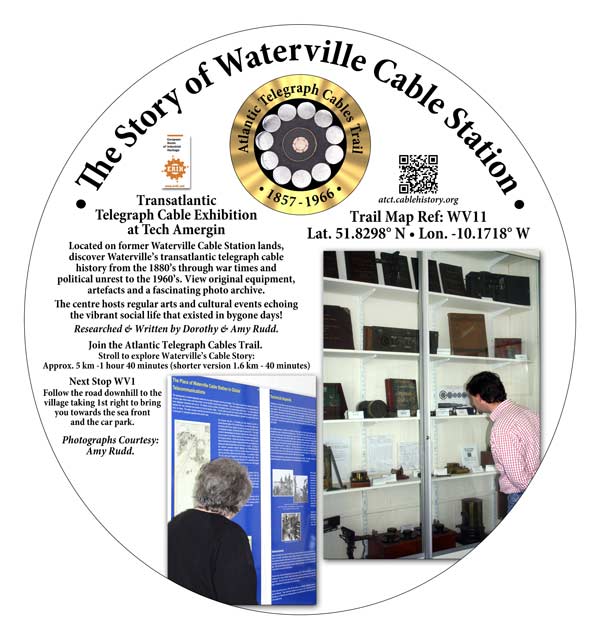 “The Story of Waterville Cable Station” Exhibition at Tech Amergin