Follow the amazing story of how the Skellig Coast of County Kerry’s Iveragh Peninsula became the 19th-century centre of global communications.

Notes for site visitors using mobile devices to scan the plaque barcodes: The Atlantic Telegraph Cables Trail has historic markers in four areas: Cahersiveen (C1 to C6), Valentia Island (V1 to V11), Ballinskelligs (B1 to B3), and Waterville (WV1 to WV11). For more information on your present location, and a list of other sites in the same area, check the Trail Map Ref code on the plaque and click on the appropriate link in the right-hand sidebar.

A brochure with detailed maps of each area and a description of all the markers is available at local tourist offices and other sites. All the information from the brochure is also on this website – just click on the area of interest in the right-hand sidebar to see details of the locations. The front and back panels of the brochure can also be seen at the bottom of this page. 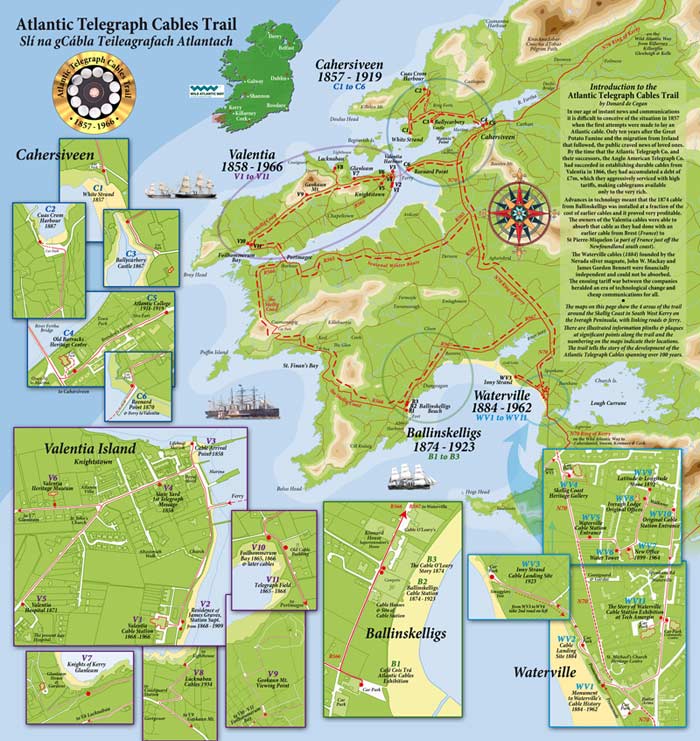 Click on the map for a larger zoomable image

In our age of instant news and communications it is difficult to conceive of the situation in 1857 when the first attempts were made to lay an Atlantic cable. Only ten years after the Great Potato Famine and the migration from Ireland that followed, the public craved news of loved ones. By the time that the Atlantic Telegraph Co. and their successors, the Anglo-American Telegraph Co., had succeeded in establishing durable cables from Valentia in 1866, they had accumulated a debt of £7m, which they aggressively serviced with high tariffs, making cablegrams available only to the very rich.

Advances in technology meant that the 1874 cable from Ballinskelligs was installed at a fraction of the cost of earlier cables and it proved very profitable. The owners of the Valentia cables were able to absorb that cable as they had done with an earlier cable from Brest (France) to St Pierre-Miquelon (a part of France just off the Newfoundland south coast).

The Waterville cables (1884) of the Commercial Cable Company, founded by the Nevada silver magnate John W. Mackay and New York newspaper proprietor James Gordon Bennett, were financially independent and could not be absorbed. The ensuing tariff war between the companies heralded an era of technological change and cheap communications for all.