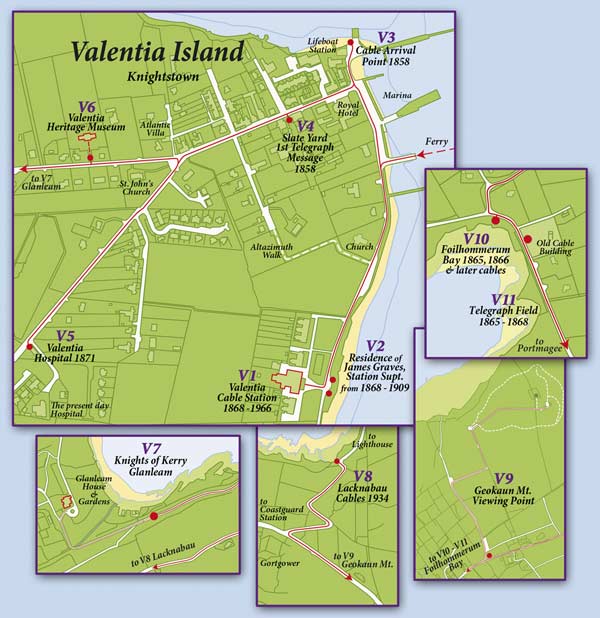 Google map of the Valentia area

After a failed 1857 attempt (C1) and a short-lived 1858 attempt (V3, V4) to lay a transatlantic cable, a permanent connection was made to the Telegraph Field (V11) at Foilhommerum Bay (V10), Valentia in 1866. In 1868 operations moved to a new building here in Knightstown, with James Graves as its Superintendent. A coded message from here told America of the 1916 Easter Rising, which led to the foundation of the Irish Free State in 1922. At its 1920 peak the cable station had over 200 staff. It closed in 1966. Recognition as a UNESCO World Heritage Site is expected. A visitor centre is planned. 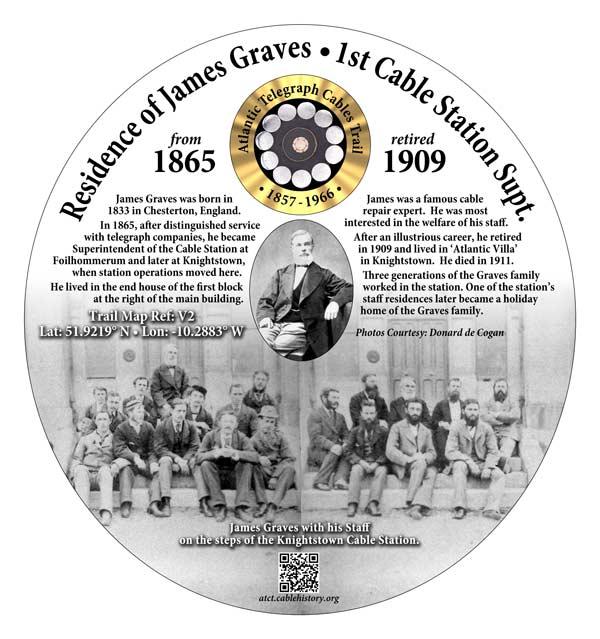 Born in 1833, James Graves was Superintendent of the Foilhommerum Cable Station (V10, V11) from 1865 to 1868 and from 1868 of the Knightstown Station (V1).  He lived there until he retired in 1909, when he went to live in nearby ‘Atlantic Villa’.  Three generations of his family worked in the Station. 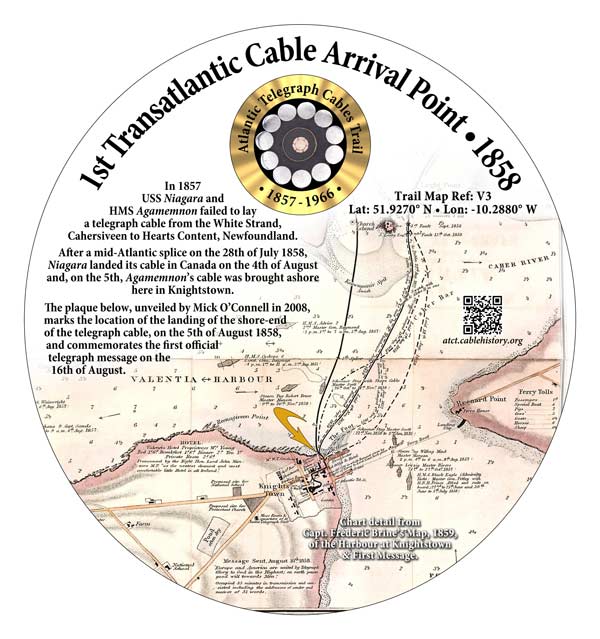 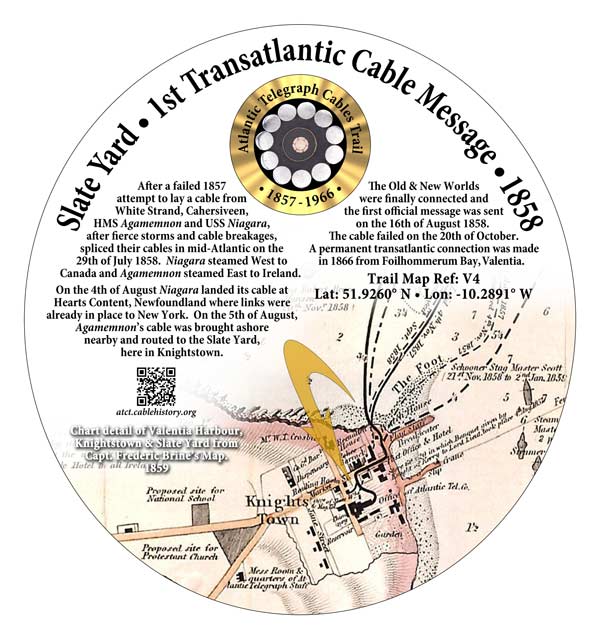 After a failed 1857 attempt from White Strand, Cahersiveen (C1), HMS Agamemnon and USS Niagara linked Newfoundland to a building here on 5th August 1858. The Old and New Worlds were connected and the first official message was sent on 16th August.  The cable failed on 20th October 1858. 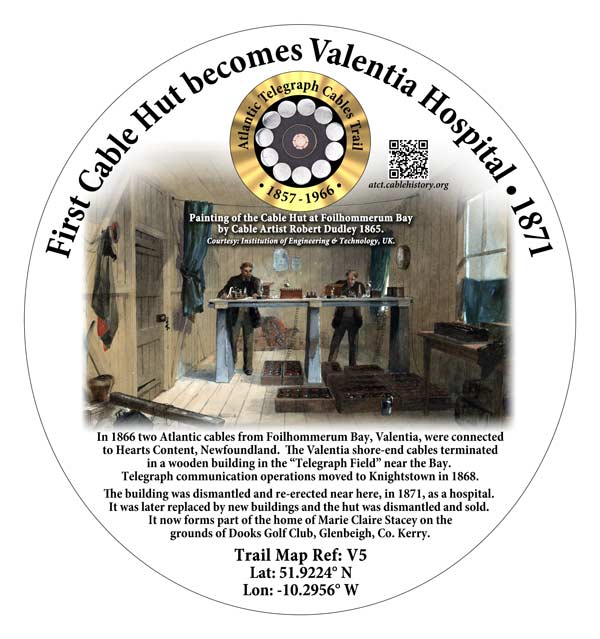 After cable operations moved from the Telegraph Field (V11) in 1868 the wooden hut was dismantled. It was re-erected near here in Knightstown in 1871 as a hospital. It now forms part of the home of Marie Claire Stacey at Dooks Golf Club, Glenbeigh, Co. Kerry. 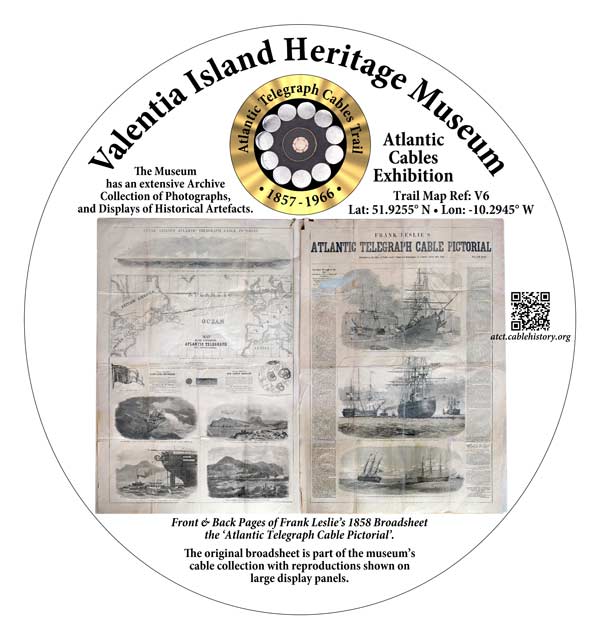 The extensive displays at the Museum in this former schoolhouse include an Atlantic Cables Exhibition. 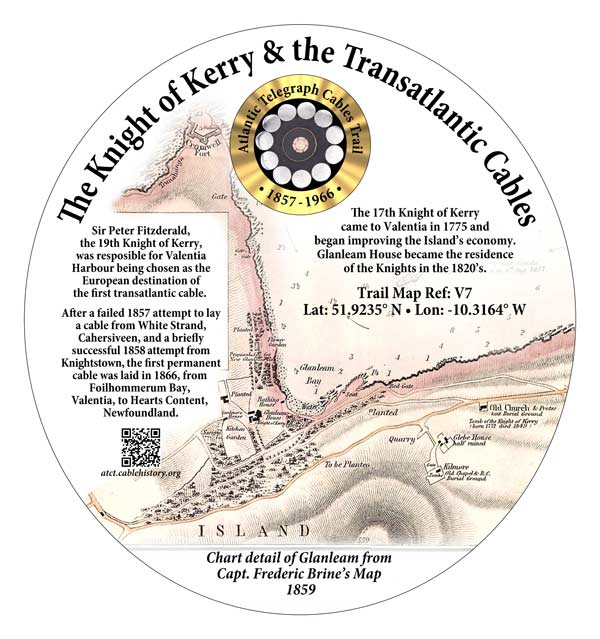 The Knight of Kerry – Glanleam

The Knights of Kerry came to Valentia in 1775.  Glanleam House was their home from the 1820s.  Sir Peter Fitzgerald, the 19th Knight, was responsible for Valentia Harbour being chosen as the European terminus of the first Atlantic cables. 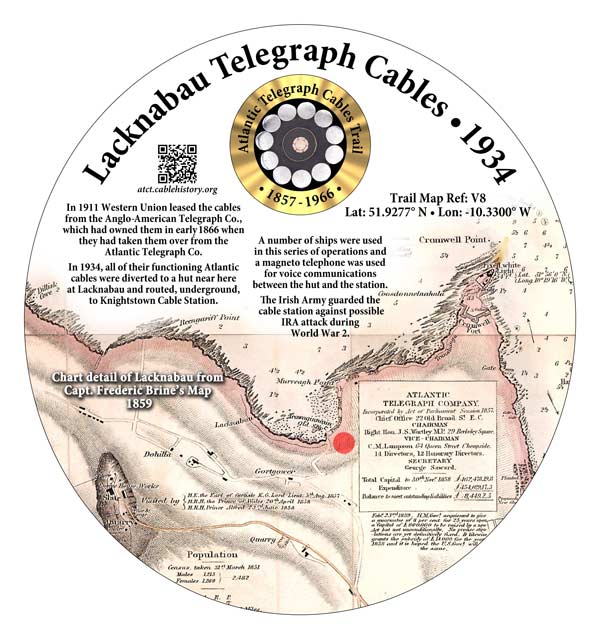 In 1934 all the functioning Valentia Atlantic cables were diverted to a hut here and routed underground to the Cable Station at Knightstown (V1). 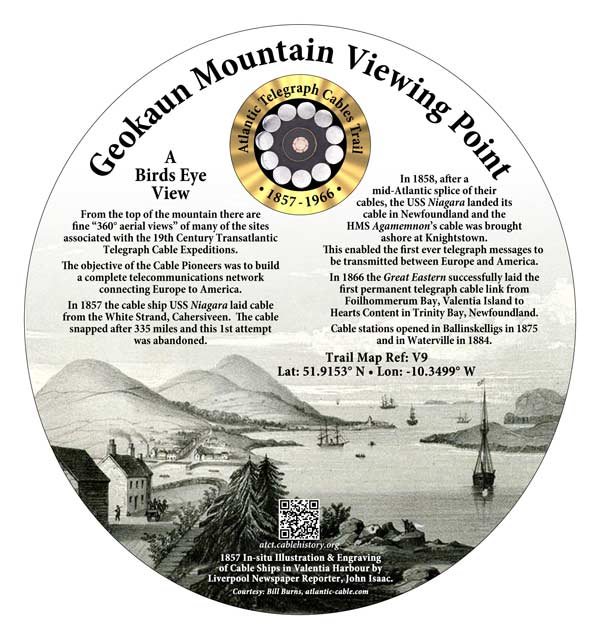 There are fine 360° aerial views from here of sites associated with the Atlantic Telegraph Cables. 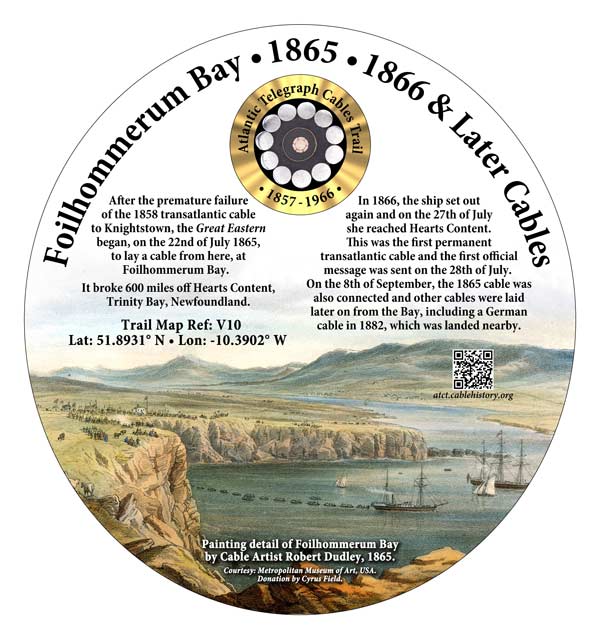 After a previous failure (C1) and a short-lived success (V3, V4,) an 1865 attempt by the SS Great Eastern to lay a transatlantic cable from here failed when the cable broke just 600 miles from Heart’s Content, Newfoundland. In 1866 the ship laid the first permanent cable and also recovered and completed the 1865 cable.  Other cables were later laid from here.
A German cable was landed near the Bay in 1882. 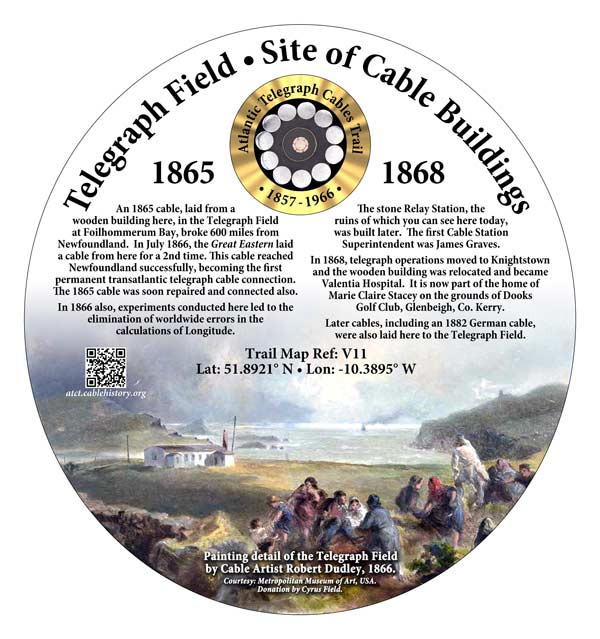 The 1865 and 1866 cables into Foilhommerum Bay (V10) terminated in a wooden hut in the Telegraph Field on the edge of the Bay.  The Superintendent was James Graves (V2).
Experiments conducted here in 1866 eliminated errors in calculating longitude by enabling time to be synchronised between Valentia and the Royal Observatory at Greenwich.  A stone Relay Building, whose ruins remain, was built later.  In 1868 telegraph operations moved to Knightstown (V1).  In 1871 the hut was moved and became Valentia Hospital (V5).